Founded by a WWII Navy Veteran, U-Haul is the Title Sponsor of the Dec. 3 Opening Gala

U-Haul International, Inc. is honoring and remembering World War II veterans with its gold-level sponsorship of the 75th commemoration of the Attack on Pearl Harbor.

In the coming days, the remaining survivors of the Dec. 7, 1941 attack will reunite in Oahu to take part in the official events leading up to this milestone anniversary. U-Haul will serve as the Presenting Veterans Sponsor of the Opening Gala on Dec. 3. Furthermore, its commitment will assist in helping veterans and their families make the trip to Pearl Harbor.

WWII Navy veteran L.S. “Sam” Shoen and his wife, Anna Mary Carty Shoen, started U-Haul in 1945 less than four years after Japan’s bombing of Pearl Harbor pulled America into battle. Consequently, veterans returning home wound up laying the foundation for U-Haul and its neighborhood dealer network. They also constituted many of the Company’s first and most loyal customers after coming back from war and requiring one-way trailer rentals to move their families.

“Our decision to get directly involved with honoring our Pearl Harbor veterans on the 75th anniversary falls in line with who we are and what we stand for,” said Stuart Shoen, U-Haul Executive Vice President. “Veterans, like my grandfather, helped build U-Haul into an industry leader by offering a basic need at a low cost. Our commitment to hiring and helping veterans has never been stronger than it is today.”

Edward J. “Joe” Shoen, Chairman and CEO of AMERCO, parent company of U-Haul, will attend the “For Love of Country – Pass It On” Opening Gala at the Pacific Aviation Museum Pearl Harbor as well as other commemoration events with his family. The commemoration has added meaning for Arizona-based U-Haul due to its corporate towers being located in Phoenix, Technical Center in Tempe and new manufacturing plant in Glendale. The USS Arizona Memorial remains an especially relevant destination for almost every Hawaii visitor.

U-Haul showcased its “Remember Pearl Harbor 75 Years” logo on its U.S. Navy SuperGraphics truck in the Phoenix Veterans Day Parade earlier this month. U-Haul also has been recognized repeatedly as one of the top U.S. veteran-friendly employers and achieved a militaryfriendly.com ranking of No. 13 in 2014.

In conclusion, U-Haul would like to thank all veterans for their service and sacrifice. 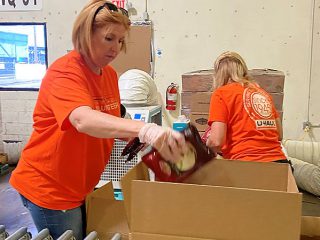