In the Community Uncategorized

WASHINGTON, D.C. — Hundreds of thousands of patriotic spectators gathered along Constitution Avenue on May 29 to watch the National Memorial Day Parade, the largest Memorial Day event in the U.S.

The parade, in its 12th year, invites Americans of all ages and generations to come together to honor the brave men and women who have served, are currently serving, and those heroes and their families who have made the ultimate sacrifice while serving to their country.

U-Haul is extremely proud to sponsor the National Memorial Day Parade, with 2017 marking the 10th consecutive year of the Company’s support and participation. The parade was launched in 2005 by the American Veterans Center in Washington, D.C., and seeks to focus the attention of Americans on the real meaning of the holiday: honoring those who have served and died to protect our liberties.

“U-Haul was one of the first sponsors of the National Memorial Day Parade when it started 12 years ago,” said Jim Roberts, president of the American Veterans Center. “I look at them as almost as one of the co-founders of the parade. Without the support of U-Haul for all these years, I don’t know where the parade would be. We are honored to have their continued support as they help us remember the sacrifices of service members and the fallen heroes.”

This year, U-Haul Team Members and their families from U-Haul Companies of Maryland, Metro D.C. and Pittsburgh, along with members of the External Communications team, joined forces again to honor and salute our fallen heroes.

“It’s always an honor to be able to show our respect to the men and women who gave their life defending the very freedoms that we enjoy today,” said Pat Goodwin, U-Haul area district vice president. “I am also very proud to see how many of our Team Members voluntarily show up in support of our fallen troops and their families.” U-Haul SuperGraphics to Mark the Occasion

The U-Haul truck showcasing the “United We Stand” SuperGraphics logo, honoring the victims of 9/11, rolled down Constitution Avenue serving as the National Memorial Day Pre-Parade entry for the sixth consecutive year. U-Haul Team Members walking alongside passed out thousands of American flags to excited attendees.

“It’s an honor to take part in such a meaningful experience. I always look forward to seeing the crowds and seeing familiar faces year to year,” said Amanda Kirsch, U-Haul Company of Metro D.C. president. “It is always an honor to be a part of this and to remember those who sacrificed their lives so we can have our freedom.”

In addition to the “United We Stand” SuperGraphics logo truck, five U-Haul trucks featuring the Armed Forces SuperGraphics were also showcased in the parade.

Since 2008, the National Memorial Day Parade has been broadcast live to U.S. troops stationed around the globe. This year, the parade was televised on the American Forces Network, reaching U.S. military installations and offices in 174 countries, as well as all U.S. Navy ships at sea.

Spirit of ’45 in Attendance

U-Haul offers its appreciation to the American Veterans Center for making the National Memorial Day Parade possible, and to U-Haul Team Members for participating and paying tribute. U-Haul also extends its most sincere gratitude to service members, past and present, and their families who have sacrificed so much and continue to fight for our freedoms.

Did you tune into the National Memorial Day Parade in Washington, D.C., this year? Have you seen the U-Haul commemorative SuperGraphics trucks on the road? Please share your experience in the comments section below. 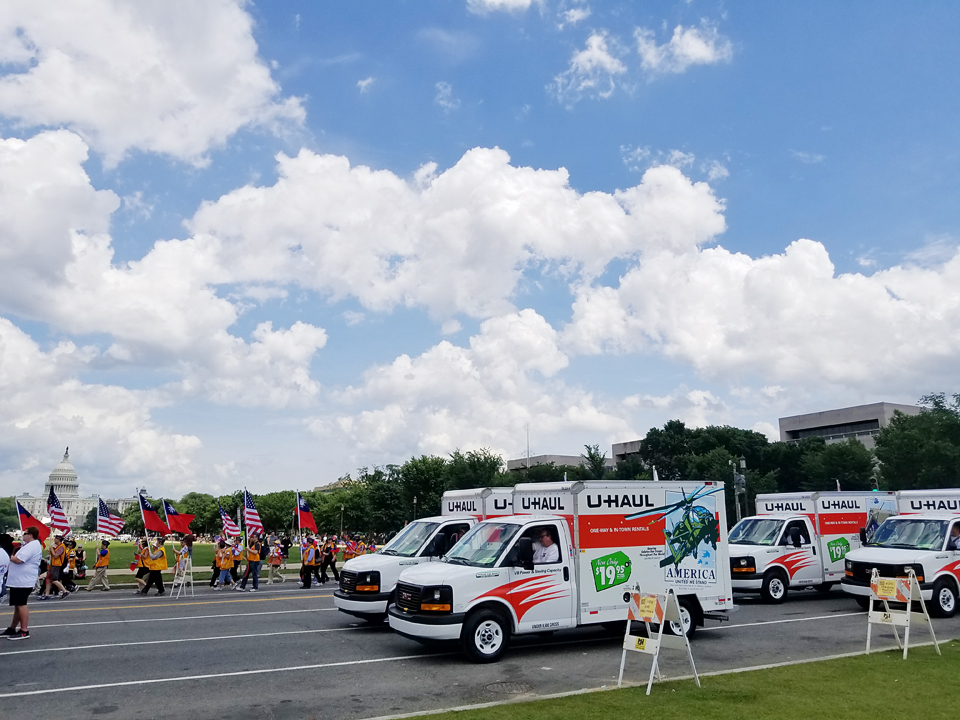 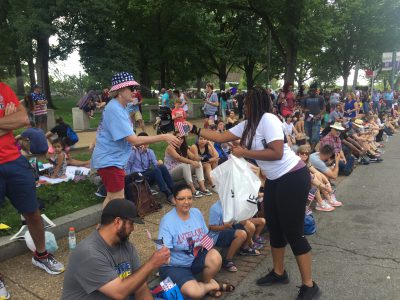 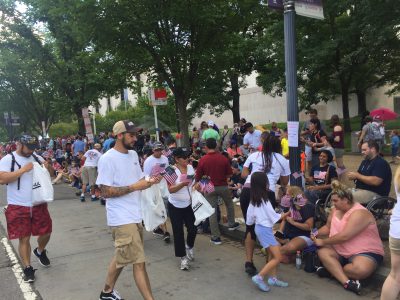 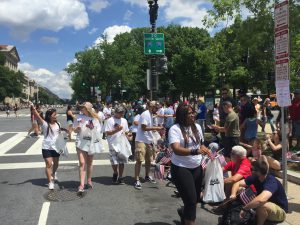 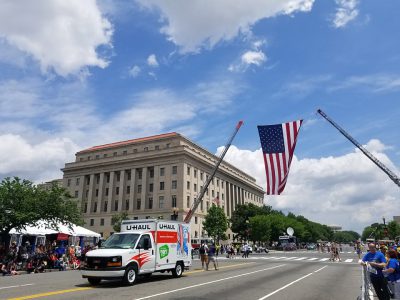 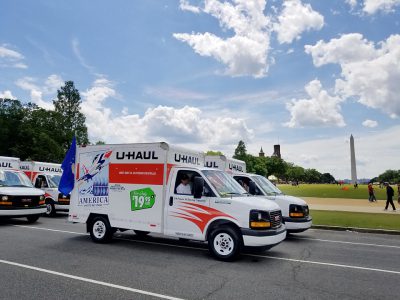 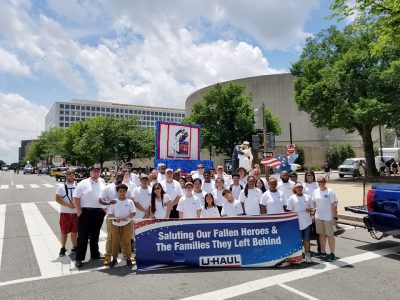 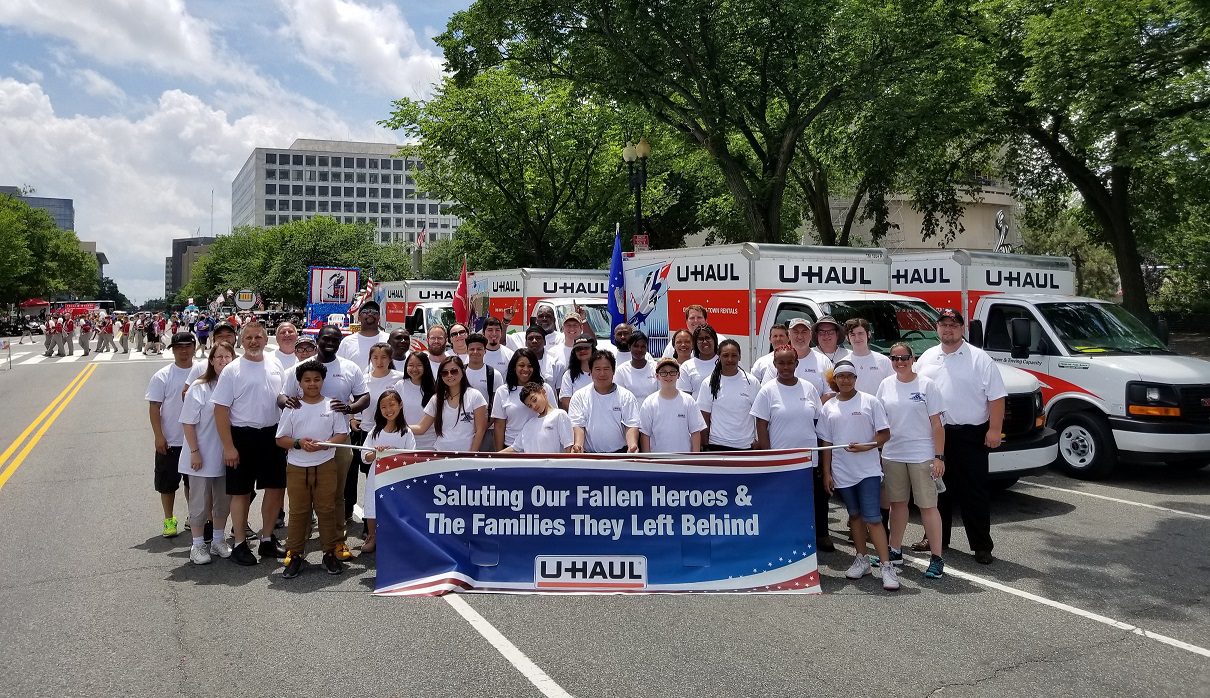