Activity at U-Haul Moving & Storage of Detroit this week demonstrates just what it takes to revitalize a 92-year-old building: hard, gritty and often dirty work. It’s necessary to clear out and clean up before you can revitalize. More than 24 tons of debris have been removed from the underground tunnel and the room that I’ve been writing about. 24 tons…that’s the equivalent of 160 Detroit Lions offensive linemen. And, amazingly enough, 75% of that was moved by only three men with shovels, rope and buckets!

We’ve initiated asbestos abatement in and around our construction of the new showroom. We’ve got parts in for one of the elevators in the building, and Detroit Elevator has scheduled work to resume next week. Electricity has been run to the second elevator and troubleshooting has begun. Now that we have water to the building, we are inspecting and testing the fire-suppression system on every floor. Removal of the dumbwaiter is still in progress. Steel recovered in the demo will be reused.

Construction plans for the showroom include radiant flooring, which we’ve spec’d out. And, as I reported last time, we expect the floor construction to begin within the next 30 days.

The gritty work is necessary, but we’re all looking forward to moving onto the work of revitalizing this grand old building. 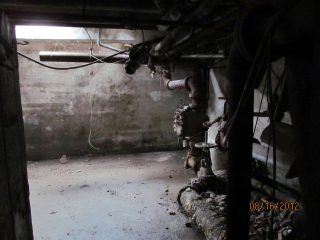