LAS VEGAS—There’s a specialist in Las Vegas whose patients are quite unique. No, he’s not one of those plastic surgeons who makes people look like their favorite celebrity. His name is Robert Ganal, and he specializes in U-Haul trucks.

The engine specialist at Kar-Go Repair of Las Vegas is a “juggernaut,” according to his co-workers, because he gets the U-Haul trucks repaired and back into action faster than most others.

“His work ethic and efficiency rub off on everyone else, and the entire team benefits,” noted Shop Manager Randy Barcomb.

That’s music to the ears of Ganal, a soft-spoken guy who hopes that his actions speak for themselves.

“I take a lot of pride in my work ethic,” Ganal declared. “I like the people here and I like this Company, so I want to do a good job. They give me the work, I do it and that’s it.”

Ganal’s title might be engine specialist, but his expertise isn’t limited to just engines. He’s also an expert at repairing and replacing brakes, transmissions and axles. When he’s working on a truck and runs into a delay such as waiting for a part, Ganal doesn’t just stop and wait.

“If he has to wait for something on one truck, he’ll have another one pulled in and start working on that one,” Barcomb observed. “It’s not uncommon to see him with two engine hoists going at the same time. He just doesn’t stand still.”

“I worked at a car dealership before coming here,” mentioned Michael Sukiasian, Ganal’s supervisor. “Sometimes, the engine specialists there would spend a week working on an engine, and when they were done, they’d want to take a break for a while before starting another one. Not Robert … he just immediately goes to work on another one.

“It’s unbelievable what he does,” Sukiasian continued. “He’s like the Energizer bunny; he just keeps going and going. I often ask myself, ‘How does he do this?’”

Don’t make Ganal think he’s doing anything special, though. It’s how he’s always operated. Before coming to U-Haul, he worked at an auto repair shop. On holidays, especially, there would be a long line of cars waiting for service, and Ganal didn’t like to make people wait unnecessarily. He brought that work ethic with him to Shop 201.

“If there’s something else to do, then I’ll do it,” Ganal shrugged. “I get bored when I’m not doing anything, so if there’s work to do, I want to help.

“My boss trusts that I’ll get the trucks repaired and back into service, so that’s what I do,” he added. “Our customers need these trucks, so I want to get them back on the road as quickly as I can.”

While it’s well-known around the repair shop that Ganal has an encyclopedic knowledge of U-Haul trucks, he readily admits there’s always something he can learn.

“If there’s ever something he can’t figure out, or if something just doesn’t look right, he’ll ask for help,” Sukiasian related. “He won’t waste a lot of time experimenting just to figure it out by himself. He never hesitates to ask for help.”

That leads to a job done right, every time.

“Robert is very thorough,” Barcomb emphasized. “When he finishes a job, you know it’s ready for final inspection. He never misses a step or cuts corners. He might have little shortcuts he’s come up with over the years to do things faster, but never when it comes to quality.” 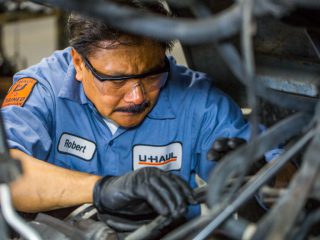 When Ganal completes a job, everyone at the shop knows it’s done right. 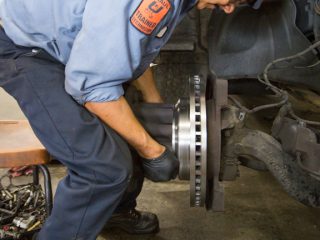 Ganal’s job title might be engine specialist, but he also replaces brakes, transmissions and axles. 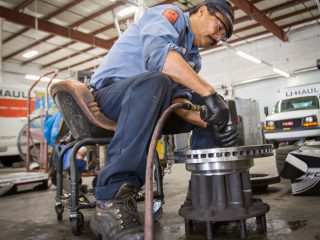 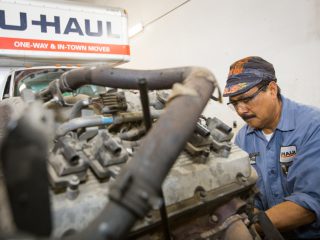 Ganal stresses attention to detail, which helps him increase his efficiency. 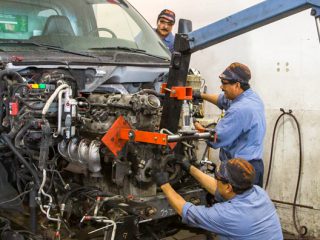 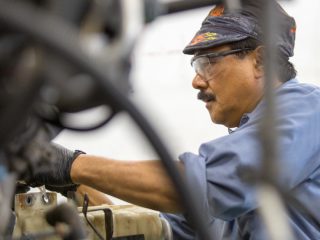 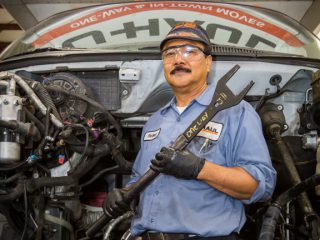