The big news this week in our revitalization efforts is that the concrete showroom floor has been poured. Read JoeyGirl’s vendor profile of K&K Concrete Construction and you will get quite a bit of detail. I’ll add a bit more here. The photos in the gallery below document the process and shows the result – a gorgeous finished product.

Unlike the simplicity of weekend, do-it-yourself projects, the process of pouring such a large floor, is more complex. The concrete was mixed outside the building, then pumped in through a snake-like snorkel tube. The crew used devices called turtles to stabilize the snorkel during the pour and to enable the crew to reposition the heavy concrete-laden tube as the pour continues. While the pour is taking place, the radiant heating tubing has to be pressured up ad checked for leaks that might develop during the pour. Thanks to the expertise of K&K and Superior Heating and Cooling, there were no leaks.

If you’ve done any concrete projects, you know that there’s more to it than just pouring it and watching it harden. Finishing is critical to shaping and creating an attractive, long-lasting surface. The finishing of the large surface area of the showroom floor required the coordination of a team of finishers and more sophisticated versions of a 2×4 screed, a darby and a hand trowel.

Due to the cold temps, the floor will need to cure for the next 7-10 days before more work can be done in the showroom.

Here’s a bit of concrete trivia for you. Did you know that concrete has been used in construction for more than 8,500 years? Do you know which building has the largest un-reinforced concrete dome ever built?

More on the showroom

Earlier in the week, we sandblasted a section of one of the showroom walls to uncover the Chicago brick that will become another design feature. Chicago brick was created during the industrial boom at the turn of the century. It’s colors are primarily red and black, sometimes with flecks of black mixed in. Chicago brick is sought after for restoring old buildings and remodeling newer buildings. We have walls of Chicago bricks. All we have to do is uncover them.

More on the brick road

We’ve removed more asphalt from the brick road we discovered last week. There was concern that the road would not be able to handle our truck traffic when we open. We’ve had a 75,000 lb excavator moving around the property during construction and the five-inch-thick bricks have handled the load well. So we are very hopeful.

We want your input

That’s it for this week. Let me know what you think. We’re looking for feedback. This blog was created for two primary reasons: first, to let the community know U-Haul is in Detroit and to share our plans with you; second, so we could get input from the community.  We want to hear from you. Tell us what you like and don’t like about our posts, building plans or anything else you want to share about Detroit.  We are excited to be part of the Detroit community and want to learn from you! 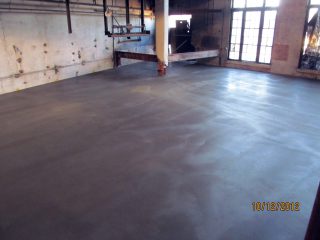